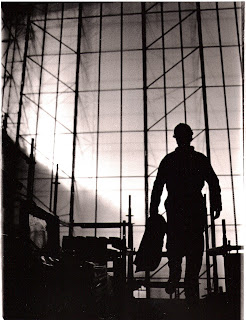 I am fortunate enough to work with a marine engineering company, on occasion anyway. I’ve been taken to Marseille and Germany so far. To see industry at this level of both expense and size is nothing short of amazing. The clients of the company I work for are owners of ‘’Super Yachts’’, toys for the ‘’super Rich’’. Their lavish designs and demands will employ contractors from all over the world. Pulling them to a dockyard in a city, possibly in a diffrirent country from their own. Where they will spend wages in hotels, restaurants and local business. So I don’t fully support views and opinions of some that are concerned how one wishes to spend a disposable income, even if it is Three Hundred Million. It was the first time I’ve seen a yacht in dry dock. The monster M/Y completely
covered with sheeted scaffolding protecting the workers and her now naked shell from the outside elements and eyes. Sometimes the noise can be unreal with so much activity going on. A gas-axe cutting a hole so the engine can be removed and craned out. Men grinding on steal; a corner of the dark hull lights up with cracking flashes and sparks from welding. Then an occasional shout would echo around. Probably highlighting a mistake or warning of one about to happen. However, especially in Germany with a regimented schedule for breaks, a silence would fall over the boat. A calm feeling would wash over from stern to bow. I would often sit and collect my thoughts before going to join the rest. Just sit and take in my surroundings.

It was a time like this that I captured a man returning his tools his box and leaving the Yacht. Maybe he had been doing the same as me on an other part of the yacht, sitting, holding back from the others. As he walks away the low winter sun silhouettes him. I can relax and enjoy the silence as it felt like the panic was over and the work can stop… for a short while….
Posted by Adam King at 20:53